It is my great privilege to be a part of the official opening of Enkundleni – a new structure that is a significant addition to our built environment that will serve as a multi-purpose forum, that both reflects and helps to deepen our core values of dignity, aspiration, creativity, and contribution. Ms Xauka, thank you, for providing us with such an excellent insight into the meaning of the isiXhosa word, Enkundleni - as we went through the process of deciding on the name for the structure. A structure that symbolises the circular courtyard or area, typical of African communities, where historically, public meetings of the people of a village or an area, have been held – to discuss and give voice to important issues.

It has been a long time in coming to this point, and I would like to share some key moments in the journey that we began several years ago, that has culminated in the official opening of Enkundleni this morning. Enkundleni has been built on the footprint of a large structure known as the ‘slave bell’ or ‘bell tower’. The ‘slave bell’ was removed in December 2020 after a long process that began about 10 years ago. During that time the way in which our school engaged with the bell tower took various forms - and can be framed as the ‘remain as is’ phase, the ‘re-imagining’ phase, the ‘removal’ phase and finally the ‘repurposing' phase.

At the start of this process, there was a view that the ‘slave bell’ reflected our history and should be left to ‘remain as is’. As a new member of staff at the time, and as a historian, my initial stance was that the discomfort caused by the ‘slave bell’ was necessary so that the painful history of our country would be acknowledged on campus. I was guided in part, by a statement made by Nelson Mandela, where he said, “South Africans must recall the terrible past so that they can deal with it, forgiving where forgiveness is necessary but never forgetting.” However, with further research, we confirmed that the so-called slave bell tower was not an authentic historical structure - it had in fact, been built in the late 1980s, some 35-40 years ago, long before the establishment of Somerset College. (It seems that the owner built the structure to create a homestead environment that was more typical of the historical 'Cape Dutch' architectural style). 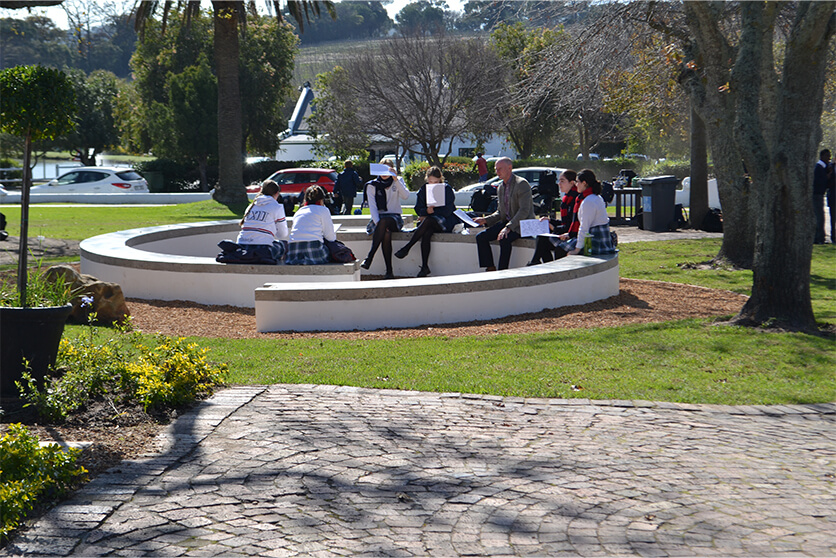 The confirmation that the bell tower was not authentic, raised further questions about the unclear, albeit unintentional, message that could be communicated to visitors or the school community by the existence of the so-called ‘slave bell’, especially due to its great size and prominent location. Important questions were asked by students and staff in various committees and forums about its symbolism and how this contradicted our school values. We discussed and debated the ways in which societies interact with monuments, and how Somerset College could engage more meaningfully with the bell tower as part of the school’s landscape. And in this way, we entered into what I call the ‘reimagining’ phase of our journey of engagement with the bell tower / ‘slave bell’.

From this point, the bell tower was used as a platform to question and challenge the symbolism of oppression that it represented to many in our school community. The idea was to use the structure to stimulate reflection by presenting thought-provoking artistic installations and commemorating key historical moments such as Human Rights Day, Youth Day and Mandela Day, to name a few. These were created by both students and staff.

However, by 2020 it became clear that the slave bell tower, regardless of our attempts to interact critically with it, remained a symbol of oppression and cause of hurt to many at Somerset College, especially knowing that it was not an authentic historical structure. It could not be left to ‘remain as is’. The decision was taken by the Somerset College Board, which accorded with the aspirations of the student body, to remove the slave bell. However, with removal, there was a keen awareness that memory of our past would recede if the site were left empty and the history of it unacknowledged and so we entered the ‘re-purposing’ phase.

As such, early in 2021, the Somerset College Student Transformation Committee began work on the conceptualising of a new structure for the site that symbolised transformation, that promoted dialogue, remembrance, community, unity and celebration. The idea was to create an interactive, creative educative space, a meeting place, as well as a place of arrival and departure, a central forum, a safe and respected space for an inclusive campus community that would feature in the day to day life of the school. 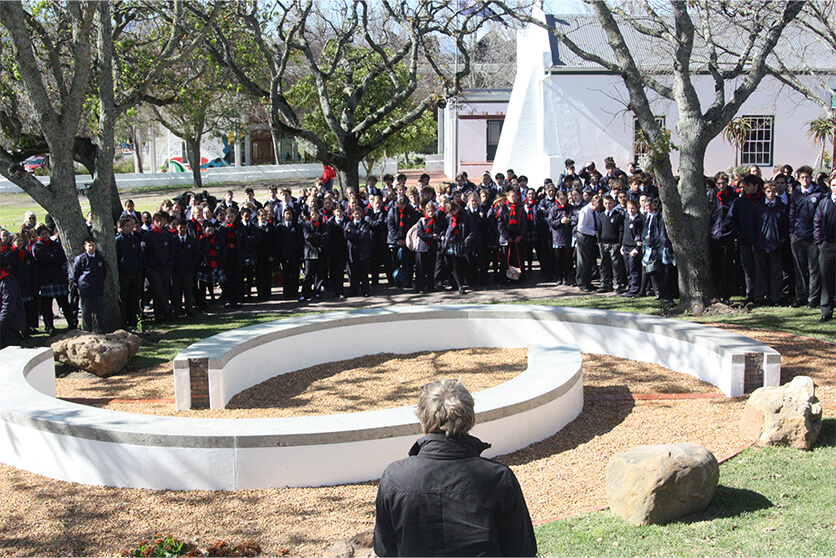 As such, early in 2021, the Somerset College Student Transformation Committee began work on the conceptualising of a new structure for the site that symbolised transformation, that promoted dialogue, remembrance, community, unity and celebration. The idea was to create an interactive, creative educative space, a meeting place, as well as a place of arrival and departure, a central forum, a safe and respected space for an inclusive campus community that would feature in the day to day life of the school.

In this regard, I would like to take this opportunity to thank the most important agents of change, the past and current members of the Student Transformation Committee for their energy and creative input during this process, which was superbly assisted by Mr David Scott and more recently by Ms Caitlin Basson. A very special mention must go to ex Head Student, Noa Brawermann, whose outstanding vision and leadership drove the project forward. It was Noa who coordinated events and ensured that deadlines were met. It was Noa who reached out to architect and urban designer, Mr Michael de Beer (an Old Oak), with the initial ideas for the new structure that we see here this morning.

On behalf of the Student Transformation Committee, I extend our sincere thanks to Mr de Beer, who played a pivotal role in taking those ideas and incorporating them into his final design of the structure that we see here today. We owe him a great debt of gratitude for his selfless contribution and for his many long hours of work over the past 18 months. His engagement is a fantastic measure of the wonderful connections that Old Oaks have with our school.

May I also take this opportunity to extend thanks on behalf of the Student Transformation Committee to Mr Sayer, Mr Matthee, Mr Young, and other members of the Somerset College Board for endorsing the project and for their significant administrative and financial support. Also, to staff who continue to give dedicated, affirming support to the Student Transformation Committee, Ms Basson, Ms Williams, Mrs Xauka and Mr Fisher. Sincere thanks also go to Mr Clack and the Facilities staff for their greatly valued involvement – I especially enjoyed our efforts to locate these rocks, which can be seen to speak to our deep history and to our resilience and strength as a people. And of course, our sincere thanks go to the construction team that worked so hard to build the Enkundleni in sometimes difficult weather conditions and to finish the project on time.